6 Reasons You Need to Visit Australia in 2017

I’m officially dubbing 2017 the Year of the Koala since now is the perfect time to finally visit Australia. Apparently this large, virtually untouched land has been here all along – did y’all know about this? They’ve got these cute bears that have not one, but TWO thumbs and these frighteningly large bunnies that will punch you in the face if you try to hug them. They’ve got a pretty nifty opera house, claiming rights to AC/DC, and a barrier reef that I hear is pretty great.

Want to visit Australia in style? Here’s the ultimate Down Under tour.

So why haven’t we been there yet? You know what, don’t answer that. 2016 was the Year of Excuses and since that’s nearly over it’s time to get our acts together and make some real changes.

For those about to rock, I give you:

6 REASONS YOU NEED TO VISIT AUSTRALIA IN 2017

(I really think these should be called ‘roosons but I’ve already laid it on pretty thick in this post… you’ll see.)

1 – AUSTRALIA RANKS AS ONE OF THE SAFEST COUNTRIES IN THE WORLD.

In a recent report by The Economist Intelligence Unit (PDF here), both Sydney and Melbourne rank in the top 10 of the world’s safest major cities. This ranking took into consideration digital, health, infrastructure, and personal safety including how likely it is a kangaroo will pickpocket you. Turns out, not likely!

2 – AUSTRALIA IS THE 2ND FRIENDLIEST COUNTRY IN THE WORLD.

Quite possibly a factor in its high safety rating is the fact that Australia is one of the world’s friendliest countries, just behind it’s neighbour to the east—Middle Earth. Call it “southern hemisphere hospitality” if you like (which I encourage) but isn’t it nice to travel to a land that welcomes its visitors with open arms, Hugh Jackman, and BBQs all the time. I assume there are just nonstop barbecues. 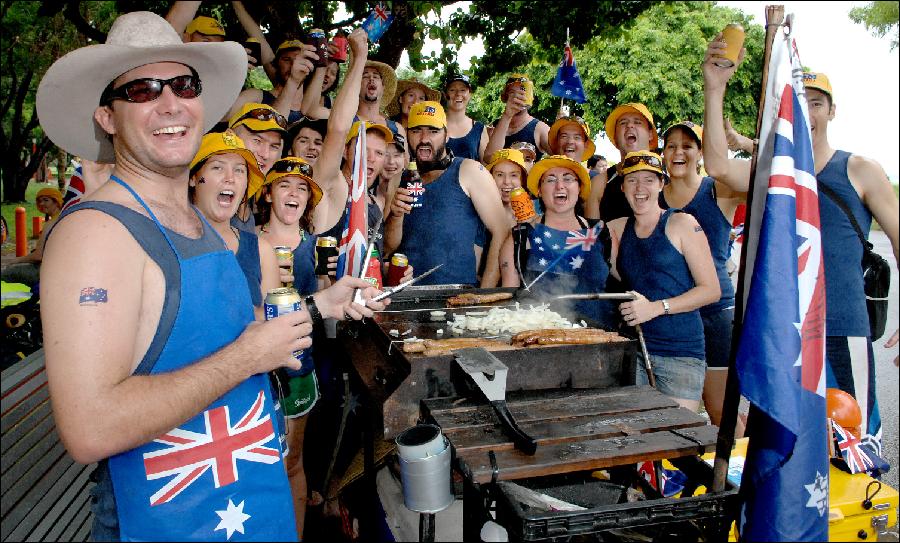 Australians are a friendly bunch

The Australian to US dollar exchange rate has been going down faster than you after a ‘roo jab to the kisser. Meanwhile, the Euro is going up. And if you’d like a simile to describe that one I’d probably go with something involving Irish alcohol tolerance or the hand of a British royal.

Check out this chart by xe.com that illustrates the 5-year downward trend of the Australian dollar and just tell me you don’t hear Chris Hemsworth’s far off voice whispering, “come here to me…”. And with great flight deals from Los Angeles, the Year of the Koala is the perfect time! 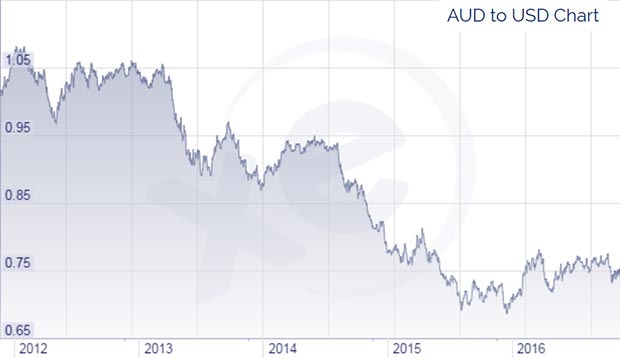 With 22,293 miles of mainland coastline (plus almost 15,000 miles of island coastline) Australia boasts some of the most amazing beaches in the world. Maybe you’ve forgotten that it shares an ocean with Hawaii, Tahiti, Fiji and Bora Bora? Australia’s Whitsunday Islands are just as lush and white and turquoise as the rest if not mora mora. Plus, there’s a reef in the shape of a heart and if that doesn’t exemplify “southern hemisphere hospitality” well then shells bells, I don’t know what does. 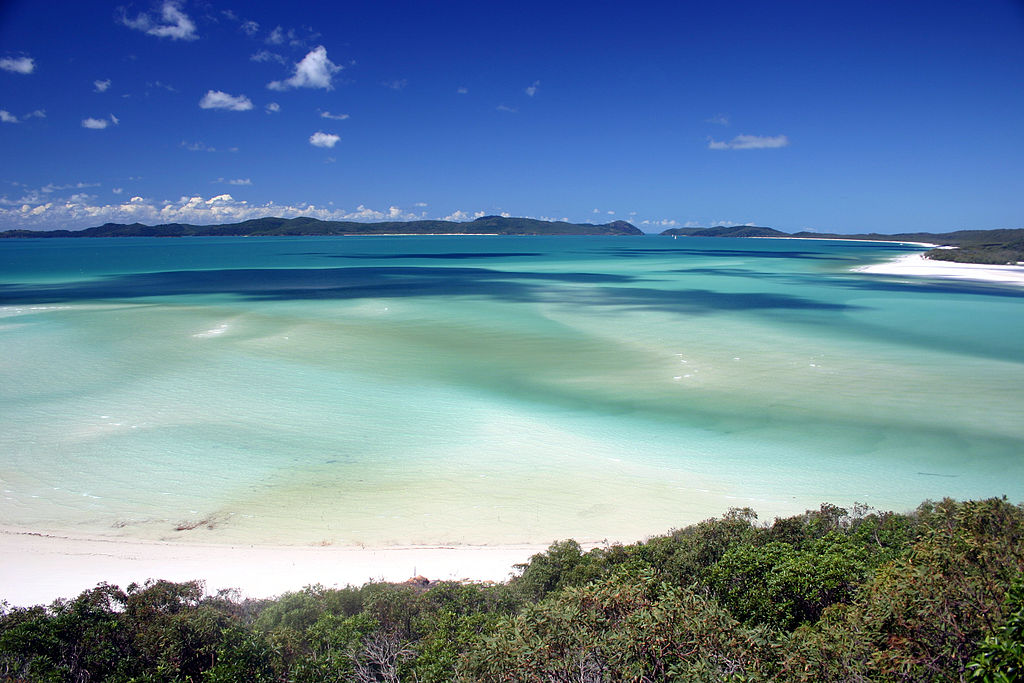 5 – AUSTRALIAN BEER-DRINKING CULTURE IS NO JOKE.

Unless it’s the one where Crocodile Dundee, Nicole Kidman and a dingo walk into a bar… at an Outback Steakhouse.

You’ve already seen articles from me on the country’s use of beer as currency… and that other one about rum as currency… so here’s some shocking news: Australians love a drink! The trend started wayyy back in the founding days of the 18th century and continues today in the 6,000+ Australian bars, beaches, and barbecues. Needles to say, you won’t be able to throw a boomerang in Australia without hitting a kickass pub… then a beach… then yourself in the face. 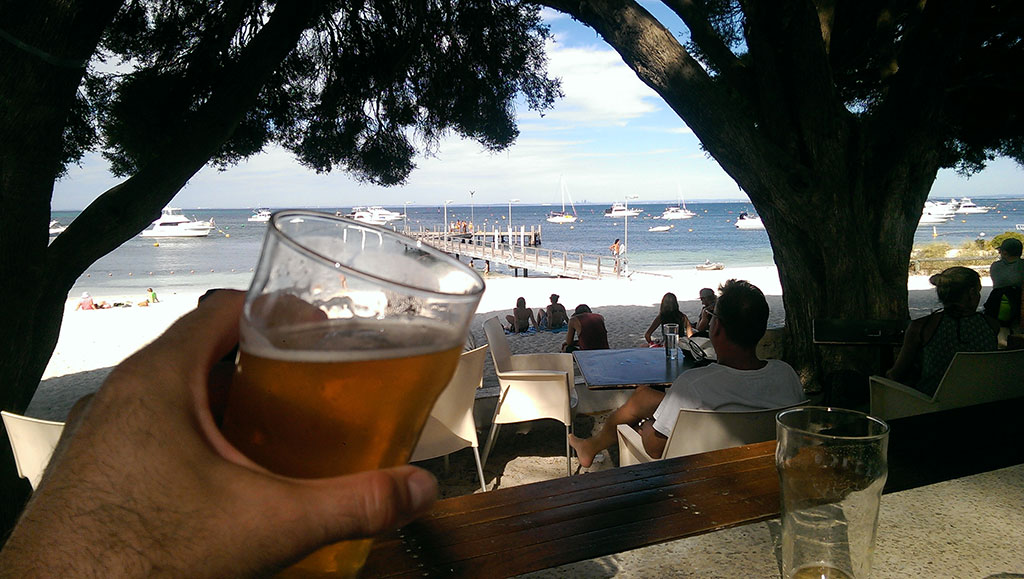 Australians love a cold beer on the beach in summer

Ready to leave the Year of Excuses behind and visit Australia in 2017? We have the perfect new tour for the Year of the Koala—the Kanga Bar Hopper tour, where you’ll be sipping beers on that beach 3 seconds into that video above. Be thirsty. 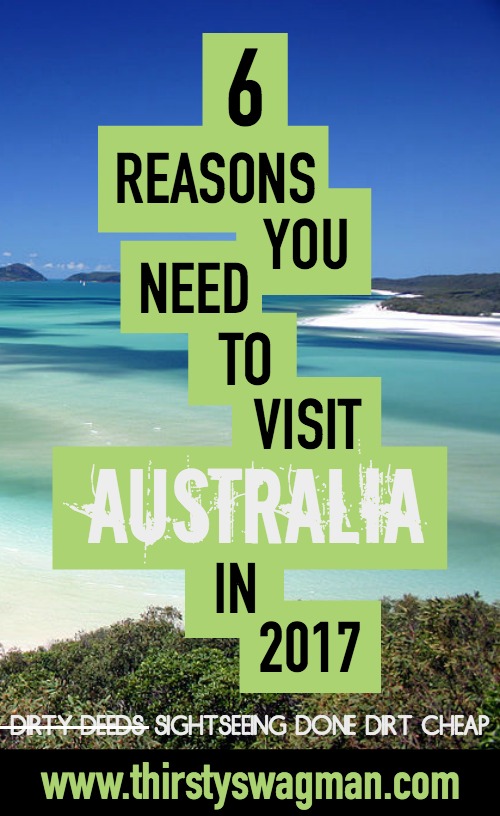