While we all know that beer is the best drink in the world (we are Thirsty Swagman, after all), there are times when grave matters call for a different type of libation. Trying to lose weight, romancing your blind date, or getting tipsy without those pesky burps? The time has come, the walrus said, to switch over to that classy liquid diet called wine.

But what’s a beer lover to do when they understand less about wine than they do about Donald Trump’s latest tweets?

Don’t sweat it—we’ve got a list of beer-friendly wine destinations that’ll be right up your alley.

Beer is of the people and for the people. That’s why your first stop for wine destinations should be Lodi, California’s largest wine appellation. You won’t have to deal with the fussy, hoity-toity types you might find in Napa; that’s because the folks in Lodi are legit fourth and fifth generation grape growing families. It’ll be like sipping vino in the living room of the winery’s owner or winemaker. Plus, the wine they’re known for – zinfandel – is so drinkable that Dionysus, the Greek god of wine, would probably wind up being BFFs with Samuel Adams. Favorites here are Klinker Brick Winery and Borra Vineyards.

Paso Robles, California is another hotspot that should be on your radar. Once you’ve honored the beer gods by guzzling IPAs and ales at Firestone Walker Brewing Company, the wine world is your oyster here. Tasting room locations run the gamut in Paso from being in warehouses to expansive properties with stunning vineyard views, and you’re never too far from a bite to eat. Put Ecluse Wines, Still Waters Vineyards, and Opolo Vineyards on your itinerary.

If you’re on the East Coast of the United States, head on up to the Finger Lakes, New York’s largest wine producing region. Though the name sounds weird—the shape of the 11 narrow lakes in the area reminded early map makers of human appendages—the Finger Lakes are killing it when it comes to delicious white wine. In fact, they’re making some of the best rieslings we’ve had, and there’s plenty of spots with gorgeous sights where you can just chill with a beverage in hand. Standouts you shouldn’t miss include Kemmeter Wines and Bloomer Creek Vineyard. The icewines of the Niagara region of Ontario, Canada also can’t be beat. This nectar of the gods is the dessert wine you never knew you needed so badly. It’s the morphine of the wine world: once you try it, you may find yourself going back time and again for more. Plus, the Canadian staff at these wineries are just so damn nice it’ll make you want to poop flowers and rainbows. You won’t be treated like an idiot here if you don’t know your cabernet franc from your merlot, and you’re not going to be surrounded by a bunch of suits–everyone’s just here to have a good time. Be sure to visit Inniskillin when it’s not too busy, Reif Estate Winery, or Strewn Winery.

Let’s be real, though: if you’re reading this, you’re probably heading to Germany for Oktoberfest, amiright? #Lifegoals. But seriously, it’s worth taking a short detour into Germany’s world famous wine regions while you’re nearby. It stands to reason that if Germany can host the world’s premier beer festival(s), they can master vino too. Head on over to the Mosel or Rheingau regions of Germany to see what they can do with fermented grape juice. The staff at these wineries may not wear dirndls or carry steins, but they’ll serve you drinks that’ll have you seeing stars.

While beer is always where it’s at, you never know—we may just make a wine fan of you yet! 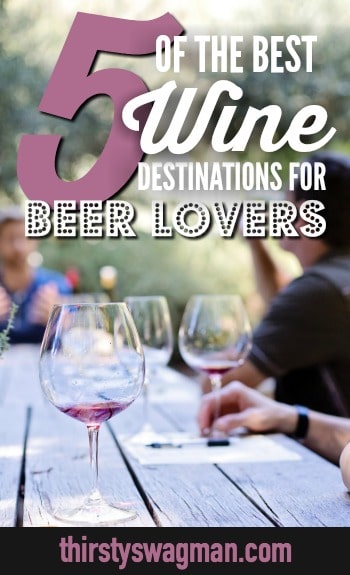