7 of the World’s Coolest Booze-Themed Hotels

Call them what you will: bed & beverages, alcohotels, hooch-tels, whatever. Either way, there’s no denying that spending the night in a booze-themed bedroom is one hell of a great way to get a good night’s sleep. And the best part? These kinds of liquor-centric lodgings can be found all over the world. I mean it!

Check out this list of 7 booze-themed hotels you need to spend the night in.

The Doghouse Hotel is a brewery… that you sleep in. The world’s first hotel inside a brewery, as a matter of fact. Sweet dreams is right.

The hotel features 32 rooms and 8 deluxe suites, each with its own beer tap (who needs sinks anyway? Pshh.), and all with views into the brewery. Wake up to the smells of active brewing then head down for a beer-paired breakfast. Needless to say, this just may be the hoppiest place on earth.

Schlafen im weinfass literally translates to “sleeping in a wine barrel” so just go ahead and take all my money now!

Each 8,000-litre room (a hotel room measured in litres in my kinda hotel room) comes with a comfortable bed, heat in the winter, separate toilet/shower facilities, and absolutely inn-toxicating unobstructed views of the Rhine Valley. There are a variety of stunning wine barrels to choose from so go ahead and cancel all your plans for today. 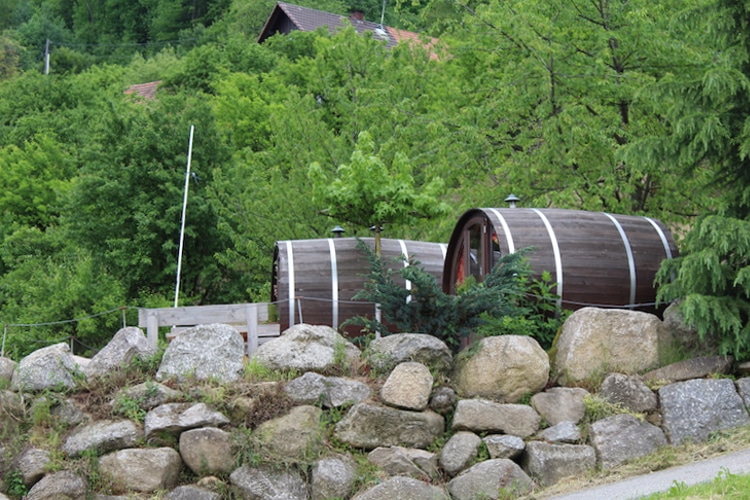 In addition to this hotel’s regular (i.e. boring as hell) rooms, the Hotel de Vrouwe van Stavoren also offers twelve converted wine barrels in which to sleep—but maybe don’t because you’ll miss all the fun!

Choose from the standard (as standard as wine-barrel-sleeping can be) 15,000-litre rooms or the 23,000-litre rooms which feature a spacious living room and bathroom with separate bath and shower. Either way, you’re getting a Smart TV in your barrel – can your at-home wine barrel say that? Wait, you don’t drink wine out of the barrel at home? Have I been spending too much time in Middle Earth? Hmm…

Located in a charming coastal town in Delaware is The Dogfish Inn, the beer-centric hotel side of the Dogfish Head brewery.

The focus here is on getting out into nature, drinking beer, and just totally chilling out with your fellow hop head. Their rooms come in Standard, Queen, Sweet!, and Super Sweet! if that gives you any idea as to the kind of weekend you’ll be having. Each room also comes with a 32-oz growler.

Spending the night in Terme Ptuj’s Wine Village is kind of like camping, but with massive wine barrels instead of tents and a communal fireplace outside your door instead of a hungry bear.

Wooden it be nice if all camping was this luxurious? The community, the cosiness, the relaxation… but mostly that sleeping in a wine barrel thing.

Chile is among the world’s top ten wine-producing regions so it’s no surprise they have their own unique alcohol accommodations. The Tabonko Guesthouse and Wine Spa is located within the vineyards, offers tours and tastings, and is simply surrounded by alpacas. (COUNT ME IN!)

They also offer a full range of wine-centric spa treatments in their wine spa (hello, red wine bath!) and a swimming pool that I can only hope is really a diving board into a million gallons of chardonnay.

The Yeatman Hotel in Porto, Portugal markets itself as one of Europe’s leading wine hotels but, like, isn’t even the crappiest wine hotel still a wine hotel? I digress.

For wine lovers, the Yeatman is where it’s at – specifically, the Presidential Suite. Marvel at the views of Porto from your enormous Port wine barrel bed, swim in your very own swimming pool that probably has just water in it, or pay tons of money to have fresh juicy grape bits rubbed all over your body.