6 Thirst-Quenching Drinks You Need to Try in Thailand

There’s one undeniable truth about Thailand’s tropical heat: It. Can. Be. Brutal. Sure, the squirt guns and water fights during Songkran can keep your sweaty self cool, but what if you’re trying to avoid getting doused with water like the plague? Stay hydrated with these six thirst-quenching drinks you need to try in Thailand — and trust us, they can help you beat the heat!

Drinks You Need to Try in Thailand // Non-Alcoholic

Some like it hot and some like it cold, but most folks can agree that cha yen is just plain delicious. Known as Thai tea or Thai iced tea, this concoction is one of those refreshing drinks you need to try in Thailand. We prefer it on the cold side: strongly brewed black tea, condensed milk, and sugar are poured over ice and then topped with evaporated milk for a tasty treat.

If you’re prone to ordering super special customized drinks at Starbucks (all right, guilty as charged), then you’ll want to learn the lingo to modify your Thai iced tea order. Want the iced tea without the dairy products? Ask for a “cha manao” (though note that it comes with freshly squeezed lime juice instead). If you want it without extra sugar, ask for it “mai waan,” or “not sweet.”

Fruit juices are another excellent option for staying hydrated in Thailand. You can get bottles or plastic bags of juice (is it just us or does that sound like a tropical version of Capri Sun?) from street stalls. You won’t be short on choices here: there’s papaya juice, watermelon juice, mango juice, pineapple juice… you get the picture.

Strangely enough, you’ll want to keep an eye out for fake orange juice. Apparently, this is a real nuisance — in one example, four people were arrested for producing the fake stuff in 2016 — and Thai officials have started to crack down on those who sell it. Still, orange juice is one of the most popular drinks in the country, and with its combination of salty and sweet flavors, it’s certainly one of the drinks you need to try in Thailand.

Did you know that the O.G. Red Bull comes from Thailand? That definitely makes it one of the drinks you need to try in Thailand, if you ask us!

Krating Daeng — which literally does mean “red bull” — is a sweetened, non-carbonated energy drink consumed by locals and tourists alike. The drink was developed in 1975 by Chaleo Yoovidhya and introduced a year later in Thailand as a refreshment for rural laborers (and horror of horrors, they didn’t really like it at first!). An Austrian entrepreneur visited Thailand in 1982, discovered that Krating Daeng cured his jet lag, and voilà! After adapting the drink to Western tastes — i.e., less sweet and less caffeine — the Red Bull you’re probably familiar with was launched in 1987. If you’re a fan of energy drinks, you’ll want to try its original iteration.

Drinks You Need to Try in Thailand // Alcoholic

With all of the mouthwatering — AKA spicy as @#$! — dishes you’ll be eating in Thailand, beer is an obvious and perfect drink pairing choice. Sure, you can drink Heineken or Carlsberg here, but why do that when you can try what’s local?

Singha, Leo, and Chang are three popular local lagers to imbibe in Thailand. Singha — pronounced “Sing” — is Thailand’s oldest beer; its name comes from the Sanskrit word for lion. Leo is a cheaper option from the makers of Singha (though both have an ABV of 5%). Chang, pronounced “Chahng,” is the main competitor to the others; despite being a bit cheaper than the previous two options, it clocks in at 6.4% ABV. You can’t go wrong with a refreshing lager in scorching heat!

If golden spirits are what you prefer, then Mekhong is one of the drinks you need to try in Thailand. Though it’s known as a whisky, since it’s made from 95% sugar cane/molasses, it’s actually more of a rum. SangSom, which was introduced in 1977, is a popular rum from Thailand as well with an ABV of 40% — not for the faint of heart!

Of course, if you’re partying it up at the Full Moon Party or can’t stomach hard liquor by itself, you can always try one of those crazy bucket drinks. Just be careful not to drink too much by yourself: the mixers (like Thai Red Bull) might mask the flavors of that local rum, but don’t be one of those people who learns the hard way that sweet doesn’t equal invincible.

Wine? In Thailand? Have we lost our minds?! No, we promise — just hear us out for a minute.

Thailand is definitely not one of the first places that comes to mind when you think about wine, right? But it turns out Thailand actually has three wine regions inside its borders. Because Thai wines are grown outside the “traditional grape-growing latitudes,” they’re part of what’s known as “New Latitude wines,” which are poised to become the Next Big Thing in wine now that we’re all drinking New World wines (think Argentina, Australia, and the U.S.). Who knows, you might get to try the Chenin Blanc at Monsoon Valley Vineyard before the rest of us oenophiles do!

Ready to explore Thailand’s drinks and nightlife? Check out Thirsty Swagman’s Songkran and Asia Annihilator tours for the wettest, wildest ride(s) of your life! 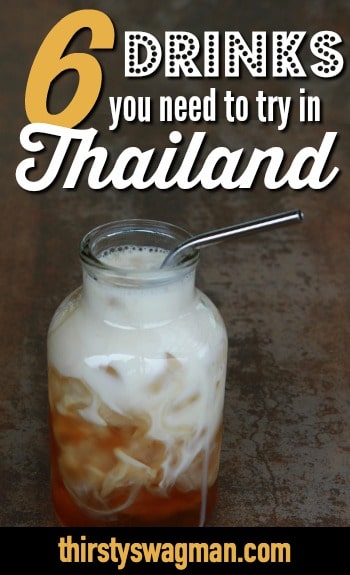