Oktoberfest around the World

Do you live for beer? You’re already likely to be a proud patron of Oktoberfest in Munich, correct? Of course, we are talking here about that 16-day celebration of the fermented alcoholic beverage that attracts 6 million people around the year to its official headquarters in Munich, Bavaria, Germany.

You might have been countless times already. Or, you might have always wanted to go. But, did you know that the Oktoberfest phenomenon is much bigger than you could imagine?

Yes, the whole world likes to celebrate the drinking of beer. Really, it comes as no surprise. Yet, you might be surprised by some of the international locations that you can choose to celebrate your Oktoberfest.

Yes – you can celebrate the classic Germanic tradition of Oktoberfest in one of the most unlikely of nations – Brazil. In fact, this beer swilling, pretzel-gorging festival is the largest of its kind in the whole of South America.

It all takes place in the city of Blumenau in Santa Carina. Created to boost the residents’ morale after a massive flood in 1984, this Oktoberfest has been pumping year after year. Blumenau can now count on a turnout of at least 700,000 to the festival.

Highlights of the Blumenau Oktoberfest include folk dances and shooting matches. If you like broads and bevvies you will love the Queen of Oktoberfest competition. 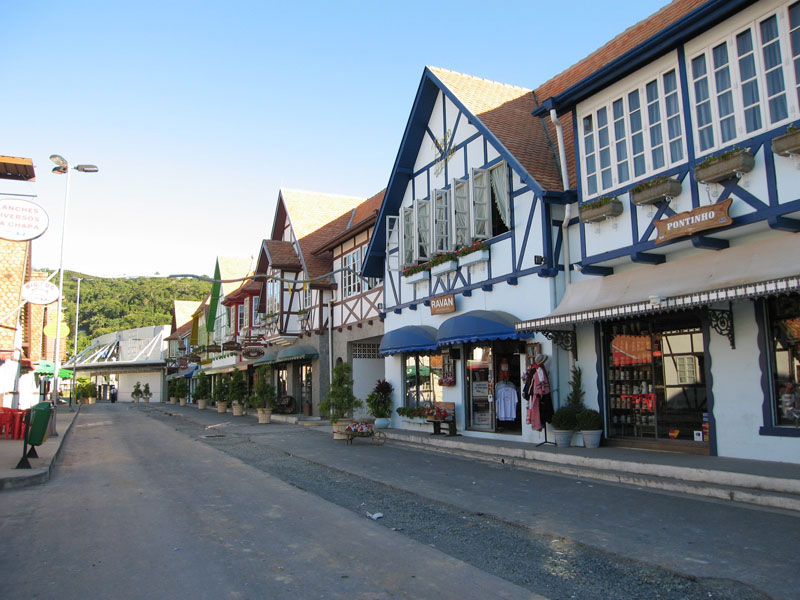 If watching people struggle to drink excessive quantities of beer is more your thing, then you will want to witness the “National competition of Chopp in Meter Drinkers”. Which translates roughly to: “Competition in which people try to drink one metre of beer without drooling”.

So, from this you would have to assume that the Oktoberfest of Blumenau should include (not, only) Brazilians, bevvies and broads… but, also a fair share of drooling…just to top it all off! Surely, this would make for one Oktoberfest experience to remember!

If you really feel like a party and want to go all out, then you can find your Oktoberfest experience in Las Vegas. You just might be able to cross off two bucket-list destinations in the one fell swoop. Oh, and you’ll also be treading the same stomping ground as Playboy bunnies Pamela Anderson and Holly Madison.

It’s said to be an exact replica of Munich’s famous beer hall – Hofbräuhaus – and comes complete German microbrewery and beer garden. Oktoberfest is celebrated in this faux beer hall in typical Las Vegas style – long-winded and riotous. And, just like playboy bunnies illustrate, it is a fact that (for some people at least) fake can beat the real deal.

Starting in mid September you’ll have the option to keep drinking right until the end of October. Bottoms up!

If it’s a Canadian flavour you wish to add to your Oktoberfest experience then look no further then its incarnation in the town of Kitchener, in the municipality of Waterloo.

The festival retains a strong Bavarian flavour due to a coordinating presence comprised of five local German community clubs. You’ll find the spirit of alpine heartiness and hospitality alive and kicking – think plenty of strudel and polka!

Running from October 11th to 19th, the festival features a Thanksgiving parade with floats, clowns, marching bands and costumed characters. And, if you love a good contest there’s a lot going on during the festival to whet your competitive appetite.

You can take part in the People’s Choice Award for best float. Or, try your luck in the barrel races and treasure hunts. The Kitchener-Waterloo Oktoberfest actually features a “Canadian Idol” and a Bavarian version of “So you think you can Dance.”

Yes – if it’s cheesiness you’re after… you will find a plenty! And, we don’t just mean the cheese bratwursts on offer.

Just as the name suggests, this festival is a marriage of classic Oktoberfest tradition (beer, beer and more beer) and a rock concert – all happening on a sub-tropical Japanese island! It takes place in October, of course, and the rock revelry with a Bavarian twist continues long after the sun has gone down on Okinawa’s Torri beach.

In terms of music and live entertainment…well, there’s two full days of it. It’s all about living hard and fast Japanese/German style. There are heavy metal acts, car and bike shows and all the rest.

Yes, let it be said – it is a little odd. When thinking of heavy mental concerts one does not immediately conjure to mind cuckoo clocks, pretzels and lederhosen (plus, the beach). But, then that’s what the beer is there for; clearly it helps everyone forget that the whole festival makes not one iota of sense.

The German food does come in handy – high carbs and high fat might go some way to fight (an almost guaranteed) head banger of a hangover.

There you have it – several international flavours of the Oktoberfest experience.

However, if you are a stickler for the tried and true (why fix something when it’s not broke) then the real deal Munich Oktoberfest 2022 is always sure to always satisfy.