When you make a mention of Brazil in a conversation, most people immediately think of Rio Carnival with its samba dancers. Others will let their minds drift to the beaches and the bikini-clad beauties. Few will think first of Oktoberfest.

Surprisingly however, the Oktoberfest Blumenau in Santa Catharina state in southern Brazil is the largest Oktoberfest in the Americas, and the largest outside of Europe.

It may seem strange as we know Brazil to be a Portuguese country, in language and customs. However the Germans were some of the first Europeans to settle in Brazil. The north east was the initial area in the 1820’s but by the 1850’s the southern portions were where the Germans were headed to start new a life.

While the immigration numbers show that up until the early 1900s the Germans were only the fourth largest group of immigrants it does not show that the average German female immigrant had 8 children, nor that the first generation had an average of 10 children. The 1930 census showed over 50% of the population considered German their mother tongue.

The History of Oktoberfest in Blumenau

Blumenau was founded in 1853 by Herman Blumenau who led 17 other families up the Itajaí-Açu river to colonize the area as farmers. The original concept did not work that well as the land was rocky for farming and the river was prone to flooding. However, they did hold on and as the settlement grew new immigrants brought new skills and a textile industry grew, one that still is a mainstay of the local economy today.

Blumenau was the earliest significant settlements in the southern portion of Brazil. German immigration peaked after WWI, at which time there were hundreds of German communities.

During the 1930s, the government of Brazil heavily garrison key parts of the south to prevent what they fear would be a self-declaration of being a German colony. German political parties were the only political force in the south at the time. In 1937, the 80th anniversary of the settlements founding, the settlement had grown to 72,000 inhabitants and was the industrial center of south Brazil. A local Nazi newspaper of that time hailed the progress of the “All German Town”. 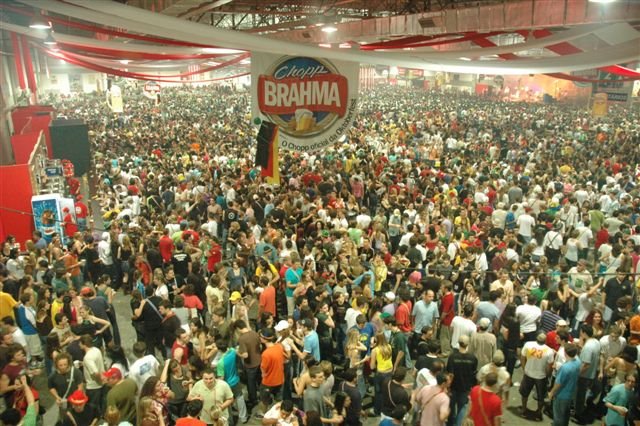 The Itajaí-Açu river was prone to flooding and in 1983 the worst floods in history occurred isolating the area for weeks. In time of crisis people often look to their roots and the following year in an effort to boost the morale an Oktoberfest was organized.

The ten-day event held in a city of almost 200,000 had over 102,000 participants. Such a great success was followed by a more than doubling of the crowd the next year as word spread to nearby cities and towns. By the third year they added a week and hit 800,000 visitors.

Many people feel that the Brazilian version is more traditional than the current Munich celebrations. Much of the old sections of the city are identical to the old cities of Germany. The local breweries have a hundred year old tradition with many of the original brew masters coming from century old breweries.

While the culture has been adapted to local conditions and influenced by other nationalities, mostly European as well, it can be said it is as strongly German as any German city of the same size today. There are dozens of social groups tied to German culture, many of those to dancing. There are also hunting and shooting clubs in the traditional manner of the German clubs. All of these are brought together for the Oktoberfest.

There are 5 official breweries, all of German origins; between them they offer about 35 different brews. There is also a selection of craft beers (microbreweries) and some imported beers. The majority of the food is similar as you will find in Munich, Bavaria.

So if you plan to visit Brazil in October, then go to Blumenau and get ready for the party of your life!