The 5 Best Copenhagen Bars You Need to Visit

Ah, Denmark. It’s not only known as the inspiration for the happiest place on Earth (Walt Disney can thank Copenhagen’s Tivoli Gardens for that), it actually is the happiest place on Earth. The Nordic country ranked first in the United Nations’ World Happiness Report in 2013, 2014, and 2016. With such happy people (which we all know equals people who are highly satisfied with their beers and their bars, right?), it’s no wonder that Denmark’s capital city has a plethora of amazing drinking options to choose from.

So with Hamlet’s eternal question – “To drink or not to drink,” of course – in mind, we consulted the Internet oracle and guidebooks galore to ensure that we found you only the best Copenhagen bars.

Rather than give you twenty options and cause so much bar-choosing stress that you spontaneously combust, we’ve narrowed it down to the five best Copenhagen bars you need to visit. These diverse Copenhagen watering holes should please everybody’s palette, from your Carlsberg-drinking grandma to your elite wine connoisseur friend. As they say in Danish, “Skål (Cheers)!”

If craft cocktails are your jam, then you’ll love Ruby, one of the best Copenhagen bars that’s been open since June 2007. As a huge whisky fan, I’ll be going over to (drink) “The Dark Side,” their aptly-named cocktail containing rum, Norliq Danish elderberry liqueur, and Laphroaig Scotch whisky. Plus, Ruby is ranked among the top 60 bars in the world, according to World’s 50 Best Bars. In fact, it ranked above my favorite New York City cocktail bar, Death & Company, in 2017, which means that Ruby has to be good.

Plush armchairs? Check. Antique bookcases? Check. Wait, are you in an American speakeasy? Not quite. You’re at the Jane, a cocktail bar in Copenhagen that was inspired by the American television show Mad Men. Upping the wow factor here is that the Jane turns into a nightclub, usually when the clock strikes twelve. While the bar’s website is a bit sparse, evidence from Trip Advisor suggests that a recently-made cocktail was called “Jon Snow is Alive.” That makes The Jane pretty darn cool in my book.

If Breaking Bad’s Walter White had experimented with hops and malt instead of the blue stuff, he could have become Mikkel Borg Bjergsø. The real-life math and physics teacher was also a home brewer back in 2006; today, Bjergsø and his microbrews hold international acclaim. (Note: Though he co-founded Mikkeller microbrewery with journalist Kristian Klarup Keller, Bjergsø has overseen Mikkeller since 2007.)  Mikkeller doesn’t operate an official brewery; rather, craft beer aficionados can visit Mikkeller Bar in the trendy district of Vesterbro to get a splash of their beer. Check out the Mikkeller Vesterbro Wit or the Mikkeller Ginger Brett IPA, both currently being served on tap.

Wessels Kro is on the other end of the spectrum from Mikkeller. It’s a “very traditional Danish bodega” (read: dive bar) where off-duty bartenders go to drink Tuborg or Carlsberg beer. In other words, it’s more about the ambiance than the drinks, but sometimes that’s all you need to have a night to remember. In fact, there’s been 150 years’ worth of nights to remember at this pub, making Wessels Kro nothing short of a Copenhagen institution. If you like draft beers and dice games, this is one of the best Copenhagen bars for you.

Calling all oenophiles: Vinhanen is where you’ll want to go in Copenhagen to get your wine fix. Located in the city’s Nørrebro district, the wine bar’s 2013 opening was a turning point in Copenhagen’s wine scene. Vinhanen manages to keep costs down for customers without sacrificing quality by offering wine on tap from large steel tanks. Generally, there’s roughly five wines on tap daily. Order by the glass or by the bottle — or, if you can’t get enough, order it to-go and take it home with you. We won’t judge.

Are there additional Copenhagen bars worthy of your precious time? Absolutely, but we have to keep at least some of them a secret. If you’re thirsty for more, check out our Nordic Rock tour that explores some of the best places to party in the North, including Copenhagen and Reykjavik! 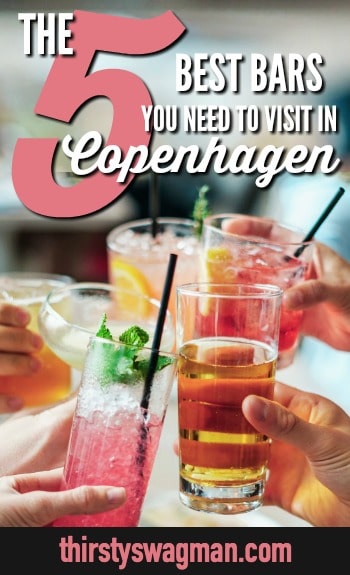