Where you decide to travel is almost always based on what kind of person you are. If you’re a museum person, you’ll visit Paris. If you’re a white sand beach person, the Caribbean. And if you’re, oh, I don’t know… the kind of person who enjoys deep-fried cheese curds, the magical land of Wisconsin is probably at the top of your list. But since I don’t know anything at all about deep-fried cheese (nope, nothing, zip, move along…) I’m here to tell you about what I do know—the best European destinations for beer lovers—because I am, in fact, a beer person.

Being a beer person means understanding travel isn’t all about sightseeing and shopping, and that to really experience a culture you need to use your mouth. Wait, what!? You can follow a map and find all the pretty places and buy all the pretty things, but what have you learned about local culture? How many new friends have you made? But most importantly, what did it taste like?

If you, too, are a travel-with-your-mouth kinda person who understands that some of the best sightseeing is done from a bar stool, here are the best European destinations for beer lovers or those that love their party vacations.

What’s the one thing you most associate with Ireland? And don’t you dare say Robert Boyle, the father of modern chemistry, because I know that’s a stone cold lie. If that’s a thing you do know, chances are you aren’t reading this article in the first place.

Instead, I bet you’re thinking… BEER. Beer beer beer! Guinness, to be exact. And you’re absolutely right to do so. Ireland’s signature beer is not only tall, dark, and handsome—the Guinness brewery in Dublin is also Ireland’s #1 tourist attraction. See? You can have top-notch sightseeing and beer at the same time!

But to really experience Ireland the way it was meant to be experienced, head to the nearest pub. Forget the number of breweries or how much beer Irish citizens drink per capita (still a lot), where Ireland excels in the world of beer is in social drinking. The loud, crowded pubs of Ireland are things of beauty. The sing-a-longs and jig-dancing and back-slapping are sights to behold and really show you what Ireland is made of. Ireland is the epitome of #publife and all other countries just wish they could have this much fun. I mean, you never see bars of people all singing along together to… French drinking songs. I pity the fool! In Ireland, you don’t go to the pub for a pint, you go for the life-changing ex-beer-ience.

Being the country with the statistic of highest beer consumption per capita (156.9 litres per person per year, to be exact), the Czech Republic is pretty much ground zero of European destinations for beer lovers.

In the Czech capital of Prague you’ll find a handful of unique ways to drink beer, that they have their own signature beer pours, and that beer is cheaper than water. (Which explains why so many of us bathe in it.) Drinking beer is Prague is clearly the economical thing to do, duh. You’ve also got pubs and microbreweries like U Fleku that’s been around since the year 1499, with servers who hand you a beer any time yours dips below half-full (whether you want it or not. But trust me, you’ll always want it).

Then there’s Pilsen, a city about 90 kilometres west of Prague known for being the birthplace of pilsners, and České Budějovice which often goes by its German name: Budweis. I think it’s safe to say that having a town called Budweis is probably a major contributor to that famous Czech beer consumption.

Germany may not be the birthplace of beer, or have the highest level of beer consumption, or even have the most breweries in the world, but, to me, Germany is the quintessential beer mecca of all European destinations for beer lovers.

Without even bringing up Oktoberfest, the world’s largest celebration of beer and Bavarian culture (see what I just did there?), Germany still leads the pack. Germany’s got Munich with its centuries-old Bavarian beer traditions, Cologne with its signature kölsch style, and the Berliner Weisse from… Frankfurt. I’m kidding—just trying to see how many beers you’ve had already today.

Germany also boasts the oldest brewery in the world—Weihenstephan—and being the beautiful blonde brains behind the Reinheitsgebot, Germany’s beer purity law. (This country has beer laws, you guys.) They’ve made beer drinking a national pastime with some of the biggest, yet somehow cosiest, beer gardens you could ever dream of plopping your ass into. And if that doesn’t sound like your idea of a vacation, I don’t think there’s any hope for you. 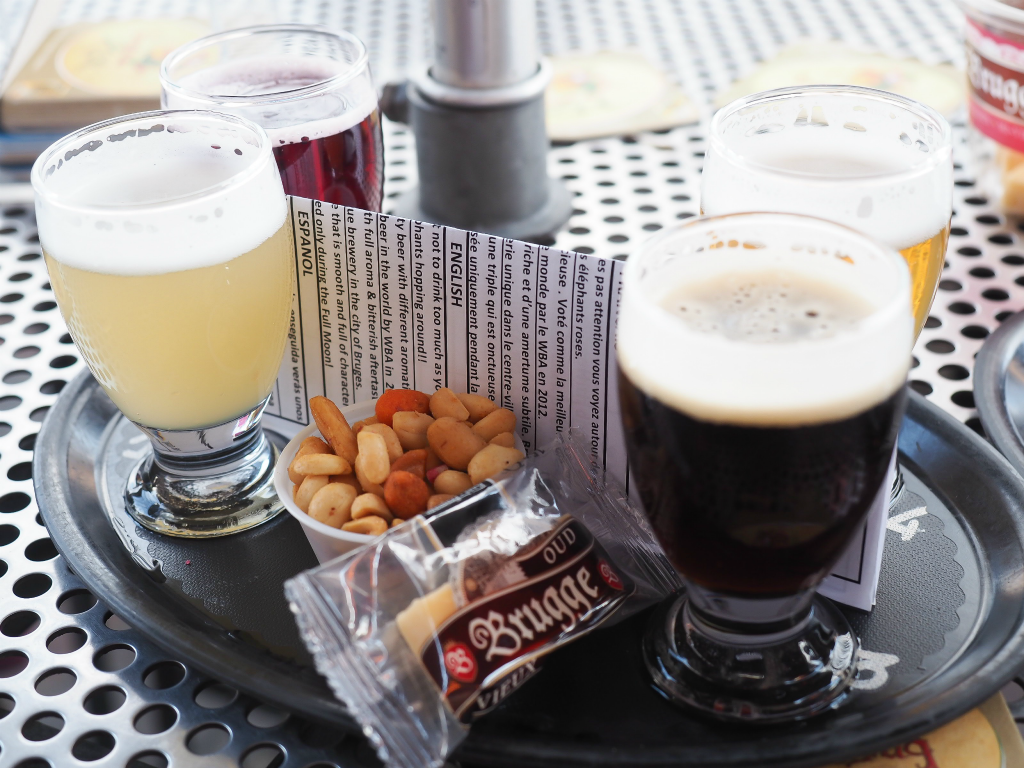 If. You. Love. Beer. You. Need. To. Visit. Belgium. I cannot stress this enough. This tiny country has 180 breweries. You can’t swing a plate of frites in Belgium without hitting one. They brew arguably some of the best beer styles in the world and serve them at some of the coolest spots. You could make an entire trip around Belgium about nothing more than beer. And I should know, I did exactly that. (And yes, my parents are very proud of me.)

In Brussels you can visit Delirium Café, the Guinness world record holder for bar with most beers. I asked for a beer list and they handed me what I initially thought were the Yellow Pages. A beer list so hefty it takes two hands to carry. Then there’s Bruges, the most adorable little medieval town that serves some of the most butt-kicking beers. Think: dubbels, tripels, and even quads. In the town of Ghent I had a beer that uses “a mixture of spices called Grut” instead of hops. A beer without hops? Yes, a beer without hops. And it was one of the best beers I’ve ever had.

Belgium is the home of trappist beers, saisons, blondes, those lambics your girlfriend loves, and the monks that brew them all. I feel like when you find yourself in a place where beer is divinely brewed, it’s a sign you’ve made all the right travel decisions.

Looking to make a trip of your own to some of these European destinations for beer lovers? Why don’t you just come with us? Check out our Oktoberfest tours to Munich, our Ireland tour, or join us for a trip to four amazing beer cities on our Beer or Bust tour.